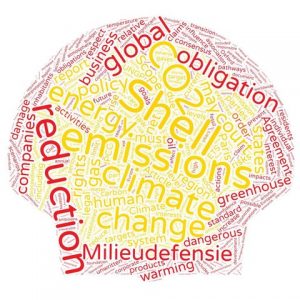 At the end of last year, the Dutch NGO Milieudefensie, together with several other NGO’s and more than 17,000 individual claimants, filed a procedure with the District Court in The Hague in which they asked the Court to order Royal Dutch Shell (RDS: the Dutch corporate holding of the Shell-group) to reduce its aggregate global CO2 emissions by 45% in 2030 (compared to the level of 2019).

On May 26, the District Court of The Hague ordered Royal Dutch Shell to reduce the CO2 emissions of the Shell group by net 45% in 2030, compared to 2019 levels, through the Shell group’s corporate policy.

Judgment of the court
In the judgment, the court stated (source: rechtspraak.nl, emphasis added):

RDS is obliged to ensure through the Shell group’s corporate policy that the CO2 emissions of the Shell group, its suppliers and its customers are reduced.

This follows from the unwritten standard of care applicable to RDS, which the court has interpreted based on the facts, widespread consensus and internationally accepted standards.

The Shell group is one of the world’s largest producers and suppliers of fossil fuels. The CO2 emissions of the Shell group, its suppliers and customers exceed those of many countries. This contributes to global warming, which causes dangerous climate change and creates serious human rights risks, such as the right to life and the right to respect for private and family life.

It is generally accepted that companies must respect human rights.

This is an individual responsibility of companies, which is separate from states’ actions. This responsibility also extends to suppliers and customers.

RDS has an obligation of result with respect to the Shell group’s CO2 emissions. As regards its suppliers and customers, RDS has a significant best-efforts obligation, which means that RDS must use its influence through the corporate policy for the Shell group, for instance by setting requirements on suppliers in its purchasing policy.

RDS has complete freedom in how it meets its reduction obligation and in shaping the Shell group’s corporate policy.

RDS has defined the Shell group’s [CO2 emissions] policy and is working it out in more detail. However, seeing as the policy is not concrete, has many caveats and is based on monitoring social developments rather than the company’s own responsibility for achieving a CO2 reduction, the court finds that there is an imminent breach of the reduction obligation.

Therefore, the court orders RDS to reduce the emissions of the Shell group, its suppliers and its customers by net 45%, as compared to 2019 levels, by the end of 2030, through the corporate policy of the Shell group.

The unwritten standard of care has been interpreted by the Dutch Supreme court as an obligation to take safety or security measures when an actor creates a situation that is dangerous to others.

Several aspects are considered when assessing if the creation of a dangerous situation constitutes an unlawful act, including the likelihood (risk) of accidents.

When determining the acceptability of such a risk, it is customary to determine if more risk has been taken than is reasonably acceptable, as well as the level of (un)certainty of the risk. When dealing with (un)certainty and risk, the “precautionary principle” is generally accepted as a guiding principle.

A unique ruling
This ruling is unique because it is the first time that a court has ordered a global energy company to change its policies in order to avoid dangerous climate change.

The court order applies to all entities of the Shell group, both in the Netherlands and abroad (1,100 companies in 80 countries).

In addition, the Court has stated that the reduction obligation relates to the Shell group’s entire energy portfolio and to the aggregate volume of all emissions (Scope 1 through to 3). In other words, the ruling does not only concern Shell’s own emissions (for example the emissions generated during oil extraction, oil transport, oil refining, etc.), but also the emissions of Shell’s suppliers and its customers.

Shell’s defense
It is noteworthy how the Court reacted to several arguments brought up by Shell:

The so-called “drug dealer defense”
Shell argued that a reduction obligation will have no effect, or could even be counterproductive because the place of the Shell group will be taken by competitors.

To which the Court replied:

Even if this were true, it will not benefit RDS. Due to the compelling interests which are served with the reduction obligation, this argument cannot justify assuming beforehand there is no need for RDS to not meet this obligation.

It is also important here that each reduction of greenhouse gas emissions has a positive effect on countering dangerous climate change. After all, each reduction means that there is more room in the carbon budget.

The court acknowledges that RDS cannot solve this global problem on its own. However, this does not absolve RDS of its individual partial responsibility to do its part regarding the emissions of the Shell group, which it can control and influence.

To which the Court replied:
[RDS] seems to ignore that it is necessary to reduce the worldwide oil and gas extraction and to facilitate the curtailment of CO2 emissions that cause dangerous climate change; other companies will also have to make a contribution. This defence therefore does not hold.

However, the interest served with the reduction obligation outweighs the Shell group’s commercial interests …

Due to the serious threats and risks .. private companies such as RDS may .. be required to take drastic measures and make financial sacrifices to limit CO2 emissions to prevent dangerous climate change.

The court has included the proportionality of the reduction obligation in its interpretation of the unwritten standard of care.

The court considers that the CO2 emissions for which RDS can be held responsible by their nature pose a very serious threat, with a high risk of damage .. and with serious human rights impacts. This applies to both current and future generations.

A characteristic feature of dangerous climate change is that every emission of CO2 and other greenhouse gases, anywhere in the world and caused in whatever manner, contributes to this development.

RDS is able to effectuate a reduction by changing its energy package.

The court was harsh in its judgment on Shell’s current approach and ambitions:

In the court’s view, RDS’ policy, policy intentions and ambitions for the Shell group largely amount to rather intangible, undefined and non-binding plans for the long-term (2050).

These plans (‘ambitions’ and ‘intentions’) are .. not unconditional but dependent on the pace at which global society moves towards the climate goals of the Paris Agreement (‘in step with society and its customers’). Emissions reduction targets for 2030 are lacking completely .. the court deduces that RDS retains the right to let the Shell group undergo a less rapid energy transition if society were to move slower.

.. RDS’ planned investments in new explorations are not compatible with the reduction target to be met .. the Shell group monitors developments in society and lets states and other parties play a pioneering role [and] disregards its [own] responsibility .. to actively effectuate its reduction obligation through .. corporate policy.

This conclusion by the court is worth noting:

.. the court disregards RDS’ argument about the desirability/undesirability of claims such as this one, and whether or not this invites everyone in global society to lodge claims against each other. RDS’ argument that it is not appropriate to impose a court order on one private party fails on the basis of the considerations on RDS’ legal obligation ..

The conclusion of the court in a generic form:

The compelling common interest that is served by [bringing CO2 emissions in line with the goals of the Paris agreement] outweighs the negative consequences [a company] might face.. and also the commercial interests ..

This verdict will undoubtedly have a major impact because it can serve as input for lawsuits against other companies in The Netherlands with high CO2 emissions, for example, Tata Steel, KLM, and Schiphol, as well as the animal farming industry.

Shell’s reaction
Shell quickly announced that it would appeal “against the disappointing court decision”.

A week later CEO Ben van Beurden asked on LinkedIn: “Should a court single out an energy company to reduce its carbon emissions”?

Apparently, the CEO of Shell thinks that Shell was singled out by the District Court of The Hague so that it could order Shell to reduce its emission. He seems to be unaware that the Court didn’t single out Shell, but instead, the Court was asked in a class action:

Background information
The full text of the verdict (English):
https://uitspraak.rechtspraak.nl/inziendocument?id=ECLI:NL:RBDHA:2021:5337

Explanation about the case by Milieudefensie (the NGO behind the court case):
https://en.milieudefensie.nl/climate-case-shell

Shell’s reaction to the ruling:
https://www.shell.nl/media/persberichten/media-releases-2021/reactie-shell-op-uitspraak-klimaatzaak.html#english

Shell CEO Ben van Beurden:
“Should a court single out an energy company to reduce its carbon emissions”?
https://www.linkedin.com/pulse/spirit-shell-rise-challenge-ben-van-beurden/

The legal merits of the case:
https://www.cliffordchance.com/insights/resources/blogs/business-and-human-rights-insights/climate-change-actions-against-corporations-milieudefensie-et-al-v-royal-dutch-shell-plc.html